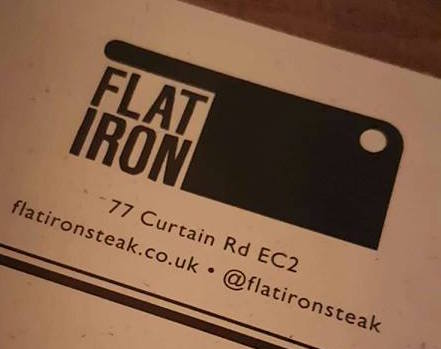 Straightener, victorian object or steak? I know which one I first thought of having a hairdresser for a mother!

I stumbled upon this hidden steakhouse on a drunken night out in Shoreditch & vowed to check it out. I say hidden because it literally is a picturesque window covered by trees & plants with a little opening for the entrance! It took 10 minutes of queuing to get into the club opposite before I realised that it was a restaurant!

Once inside you are overwhelmed with a real, homely aura as you see walls made up of logs & a wood oven at the rear of the restaurant. I wasn’t sure if I was going to be seated as you cannot make reservations at this place. However I was immediately given a table right next to the enormous oven, despite how busy they were (on a Tuesday night may I add!)

This already set a positive vibe for the night because 1. I had read reviews where people were waiting to be seated for up to 2 hours 2. it was a very cold evening.

The menu was simple but it completely worked. I am not a big fan of complex menus anyway because I believe that as a restaurant, you specialise in a certain cuisine. Why try to cater to lots of different tastes? You have your flavour & style already set out; perfect those dishes! That way there is also little room for error.

So, I was given my menu & noticed that there were no starters on there – just straight in for the kill (no pun intended!) I was told that for the mains, I could choose from either a sharing steak, the infamous flat iron steak or a burger. This reminded me a bit of Burger & Lobster in the sense that you can only order a burger, lobster or lobster roll. Of course I opted for the flat iron steak because it would be rude not to try the restaurant’s specialty on my first visit! I was then told that the market greens of the day were cabbage so again I had to try. The market greens change daily so if I was to go on another day, I would be very lucky to receive the same again.

To accompany the steak, diners have a choice of a classic peppercorn, béarnaise, horseradish or “Fred’s” sauce. Just to be controversial, I asked what the latter sauce contained & it was a spicy sauce which tickled my fancy until I found out it was served cold. A bit too different for my liking.

Other sides included chips, creamy spinach, salad or roasted aubergine. I also noticed that there were no desserts on the menu which really intrigued me. I am quite a fatty when it comes to food & when I go out to eat, I like to have the full works eg starter, main & dessert so you can only imagine the disappointment on my face. That frown soon turned into a smile when my food arrived 10 minutes later. I barely had time to take a sip from my rose lemonade! Yes that’s right ROSE LEMONADE.

I am sure we can agree that the steak looks amazingly succulent & cooked to perfection. Incase you didn’t know, Flat Iron is the cut of the steak which in this case is the shoulder – we learn something new everyday! It already came finely sliced which was a nice touch as it not only saved you struggling to cut up a big lump of meat, but it also allowed you to see if it was cooked to your liking. It additionally made you feel like you weren’t eating as much which is always good if you are wearing jeans! The one thing which did confuse me a bit was the cleaver knife. I get that this is part of the theme but effectively, you don’t actually need it! It was still fun to use nevertheless…

The dripping cooked chips were just the right amount of crispy as well as fluffy inside. I am glad I opted for the classic peppercorn sauce for a quirky take on a classic meal, as it added just the right moistness to the steak as well as a kick – it was so good I even began to dip my chips in it! The salad had a subtle lemon zest dressing over it which cancelled out the pepper of the sauce, so worked as a great condiment.

The second I finished my delicious meal, my hungry eyes wandered to the table next to me as I noticed that they had some kind of dessert. To my delight, my plate was taken & I was asked if I wanted one. I obviously said yes & asked to see the menu where I was told that they don’t have any, they only have one dessert per night. The dessert of the day featured what seems to be the trend in food & drink nowadays “salted caramel”. I was so glad to hear this because I am addicted to Costa’s salted caramel cappuccino rn & it actually came in a coffee cup! What also made it different was the fact that it came unsalted. I was literally given a pot of sea salt to add to my caramel mousse as I pleased!

Overall, it was a great meal & I would certainly recommend. You receive good, quality steak in a cool setting & at a fraction of the price you would pay at most steak houses. You are served uber fast which leads me on to my theory that Flat Iron is like the Nando’s of steakhouses. Despite their obvious differences, they hold many similarities: you cannot book a table, food is served quickly, reasonable prices & they are both chains. They even had the same shaky tables!

Whether you are after an enjoyable eat or a few afterwork drinks Flat Iron is the place. Why not take the plunge and #DiscoverDifference for yourself?